Sale on canvas prints! Use code ABCXYZ at checkout for a special discount!

A day in my life as a photographer. 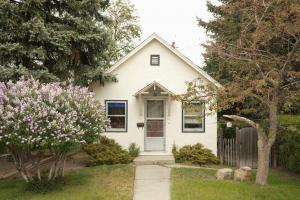 This house was the first small one I was infatuated with in Helena. It is near the laundromat I use. After I had taken dozens of photos over 8-12 weeks the owner beckoned me from his front door. He wanted to be sure that I was not the press or the police.

He told me that his house was originally the Spring Hill Mine office up one of the gulches near Unionville. In 1940 it was moved to Helena. I found this interesting and started a project collecting photos of interesting small buildings not on the historical register.

At 7am while still on my first cup of coffee I noticed the light and thought it might be favorable for taking a photo of the house. Among the photos I took this morning is the best of all those I have taken in the last several months if one of the criteria is blooms on the lilac bush. One picture, perhaps, has the best moment of light today, at least while I was there, another has the better composition. For my eye the bird feeder should be centered above the gate. One step left or right makes a difference.

I felt the best position was about 7'4' above street level so I held the camera above my head. My new trifocals made it very difficult to see if everything was right before pressing the shutter.

I returned in the afternoon because the sun and the clouds were playing tag. When the sun went behind the clouds I jumped out of the car and took a picture or two until the sun came out again. This photo is the "perfect as it gets" photo for this house. I will keep checking for blooms on the Oriental Crab, which may not bloom this year. Now on to the next small house on my list.

When I have two or more of this series complete I may upload them here.